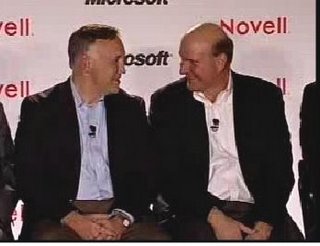 What the heck are Microsoft and Novell up to? At the beginning of this month, the companies announced a multi-part agreement, wherein they’d work together to improve interoperability between SUSE Linux and Windows. That’s all well and good. But there’s more to the agreement, much more, that is not well and good.

* Microsoft agreed to redistribute SUSE Linux Enterprise to its customer base – to run inside virtual machine under Windows Server 2003. That’s bizarre, but I can see where it might appear to be a win-win. Novell gets some Microsoft endorsement, and Microsoft can sell server licenses. However, statements like “Novell will also make running royalty payments based on a percentage of its revenues from open source products” are worrisome and suspicious.

* There’s also a patent cross-licensing agreement in the deal, which Novell says was added at Microsoft’s request. The gist of that agreement was presented as that Novell and Microsoft wouldn’t not to sue each others’ customers over patent infringement. That’s even more bizarre: Why would Novell think that Microsoft would be able to sue Novell’s customers? Why would Microsoft think that Novell would be able to sue Microsoft’s customers?

Predictably, the blogosphere went nuts over the agreement (sparked by inflammatory comments by Red Hat, the other big Linux distributor, and its JBoss subsidiary). Is Novell selling out? (Answer: Yes.) Is Microsoft launching a new attempt to crush Linux? (Answer: Yes.) However, it all would have died down in a few days… had not Microsoft itself showed its cards.

In the press conference, blogged by the Seattle Post-Intelligencer, Microsoft CEO Steve Ballmer (pictured, sitting with Novell CEO Ron Hovsepian) asserted that Linux contains Microsoft intellectual property: “But to the degree that people are going to deploy Linux, we want Suse Linux to have the highest percent share of that, because only a customer who has Suse Linux actually has paid properly for the use of intellectual property from Microsoft.”

Novell immediately cried foul, denying that SUSE Linux contains Microsoft intellectual property, and insisting that in making a cross-licensing agreement, it wasn’t implicitly acknowledging any infringement. Microsoft is sticking to its guns, however:

“Microsoft and Novell have agreed to disagree on whether certain open source offerings infringe Microsoft patents and whether certain Microsoft offerings infringe Novell patents…. We at Microsoft respect Novell’s point of view on the patent issue, even while we respectfully take a different view. Novell is absolutely right in stating that it did not admit or acknowledge any patent problems as part of entering into the patent collaboration agreement. At Microsoft we undertook our own analysis of our patent portfolio and concluded that it was necessary and important to create a patent covenant for customers of these products.”

Two things are clear. First, Novell appears to have signed an agreement that it didn’t read carefully. Second, we’re going to hear a lot more about this… from Microsoft. Probably in court documents.