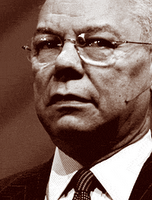 Gen. Powell had the audience in stitches during his keynote address at Dreamforce 2006, the user conference held by software-as-a-service pioneer Salesforce.com today in S.F. The general riffed on a number of themes: he mocked President Bush’s “When I looked in [Russian president ] Putin’s eyes, I saw his soul” statement, pined after his government-issued Boeing 757 aircraft, laughed about his BlackBerry, and shared his wife Alma’s advice on working with the government.

The keynote address, which lasted about an hour, meandered. The general shared his views about the benefits of corporate philanthropy, the state of the world, conflicts in Europe, Asia, Africa and the Middle East. He reminisced about his training as a young lieutenant, and his first days at the State Department. He talked about looking into Mr. Putin’s eyes, and seeing the KGB. He talked about the economy, about terrorism, about security, about war, about peace.

I took a lot of notes and photographs during Gen. Powell’s talk (that’s my own picture above), but what struck me most were his comments regarding leadership.

Leaders, he said, don’t merely motivate their followers. They inspire their followers — and inspiration makes them motivate themselves, which is obviously desireable. In fact, he said (repeating advice given to him early in his career), if you’re a good enough leader your followers will follow you if for no reason other than curiosity about where you’re going to take them… with trust that the journey is worthwhile.

Gen. Powell talked about the attributes of a good leader. A leader, he says, has to have vision about what the enterprise is doing, and why it’s doing it. That doesn’t just mean the CEO’s overarching vision. A department head, a business-unit manager, a shop steward, even a team leader within a workgroup, all need vision if they’re going to lead.

But the leader needs more than vision (and the ability to communicate that vision). A leader has to be able to give his followers the tools they need to do the job, as well as the training needed to use those tools. Why? Because it’s the followers who get the job done.

A general might know that the army needs to take a certain hill, or protect a certain city, or set up camp in a certain valley. But it’s the troops who take that hill, protect that city and set up the camp.

A leader also needs to be willing and able to discipline the followers when they need it. Why? It’s important for morale and inspiration. If the good followers see that someone is being a bad follower and nothing is being done, then the good followers will say ‘why should I bother?’ and then it all collapses. “If you’re not doing that, you’re not a good leader,” the general said.

And finally, you need to do the right thing. “Everyone wants to be part of an organization that has high standards,” he said. I have no doubt that any organization that Gen. Powell is involved with will have the highest standards possible.

But would someone give this guy an airplane?

See SPOT RunRay Noorda: The man who lost the LAN
Scroll to top