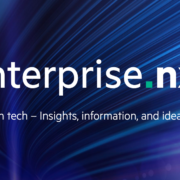 The editors of Enterprise.nxt wanted to publish one of my photos to illustrate their article, “Geek spotting: 3 ways to recognize a tech geek in the wild.” Yeah, it’s a photo of yours truly driving around in his Mazda Miata alongside a giant Pickett slide rule.

Correction. Actually, it’s my wife’s Miata — a surprise birthday present back in 2006.

While I am very much a geek, it’s ironic that I don’t fit into a lot of geek culture. For example, Judy-Anne Goldman’s article says,

Geeks instinctively know how to recognize other geeks based on shared interests, such as TV shows like “Big Bang Theory,” role-playing games, or Comic Con. But, in the way that old-school nerds could be recognized by their calculators and pocket protectors, today we can categorize geeks in three ways: by what they wear, the first-adopter technology they acquire, and the vintage technology they use until it dies.

Yet I have never watched a full episode of Big Bang Theory, don’t care for role-playing games, and have no interest in attending Comic Con. (I did go to one Star Trek convention in the late 1990s. One was enough.)

Enjoy the article and enjoy my photograph.

The human-error side of cybersecurity
Scroll to top