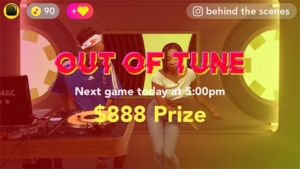 Can you name that Top 40 pop song in 10 seconds? Sure, that sounds easy. Can you name that pop song—even if it’s played slightly out of tune? Uh oh, that’s a lot harder. However, if you can guess 10 in a row, you might share in a cash prize.

That’s the point of “Out of Tune,” an online music trivia game where players mostly in their teens and 20s compete to win small cash prizes–just enough to make the game more fun. And fun is the point of “Out of Tune,” launched in August by FTW Studios, a startup based in New York. What’s different about “Out of Tune” is that it’s designed for group play in real time. The intent is that players will get together in groups, and play together using their Android or Apple iOS phones.

Unlike in first-person shooter games, or other activities where a game player is interacting with the game’s internal logic, “Out of Tune” emphasizes the human-to-human aspect. Each game is broadcast live from New York — sometimes from FTW Studio’s facilities, sometimes from a live venue. Each game is hosted by a DJ, and is enjoyed through streaming video. “We’re not in the game show business or the music business,” says Avner Ronen, FTW Studio’s founder and CEO. “We’re in the shared experiences business.”

Because of all that human interaction, game players should feel like they’re part of something big, part of a group. “It’s social, says Ronen, noting 70% of its participants today are female. “The audience is younger, and people play with their friends.”

How does the game work? Twice a day, at 8 p.m. and 11 p.m. Eastern time, a DJ launches the game live from New York City. The game consists of 10 pop songs played slightly out of tune—and players, using a mobile app on their phones, have 10 seconds to guess the song. Players who guess all the songs correctly share in that event’s prize money.

Learn more about FTW Studios – and how the software works – in my story in Forbes, “This Online Game Features Out-Of-Tune Pop Songs. The End Game Is About Much More.”