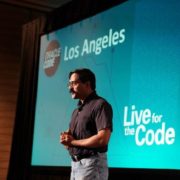 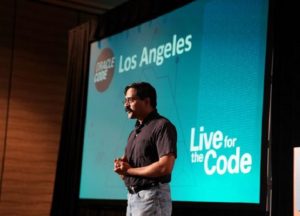 Albert Einstein famously said, “Everything should be made as simple as possible, but not simpler.” Agile development guru Venkat Subramaniam has a knack for taking that insight and illustrating just how desperately the software development process needs the lessons of Professor Einstein.

As the keynote speaker at the Oracle Code event in Los Angeles—the first in a 14-city tour of events for developers—Subramaniam describes the art of simplicity, and why and how complexity becomes the enemy. While few would argue that complex is better, that’s what we often end up creating, because complex applications or source code may make us feel smart. But if someone says our software design or core algorithm looks simple, well, we feel bad—perhaps the problem was easy and obvious.

Subramaniam, who’s president of Agile Developer and an instructional professor at the University of Houston, urges us instead to take pride in coming up with a simple solution. “It takes a lot of courage to say, ‘we don’t need to make this complex,’” he argues. (See his full keynote, or register for an upcoming Oracle Code event.)

Simplicity Is Not Simple

Simplicity is hard to define, so let’s start by considering what simple is not, says Subramaniam. In most cases, our first attempts at solving a problem won’t be simple at all. The most intuitive solution might be overly verbose, or inefficient, or perhaps difficult to understand, even by its programmers after the fact.

Simple is not clever. Clever software, or clever solutions, may feel worthwhile, and might cause people to pat developers on the back. But ultimately, it’s hard to understand, and can be hard to change later. “Clever code is self-obfuscating,” says Subramaniam, meaning that it can be incomprehensible. “Even programmers can’t understand their clever code a week later.”

Simple is not necessarily familiar. Subramaniam insists that we are drawn to the old, comfortable ways of writing software, even when those methods are terribly inefficient. He mentioned someone who wrote code with 70 “if/then” questions in a series—because it was familiar. But it certainly wasn’t simple, and would be nearly impossible to debug or modify later. Something that we’re not familiar with may actually be simpler than what we’re comfortable with. To fight complexity, Subramaniam recommends learning new approaches and staying up with the latest thinking and the latest paradigms.

Simple is not over-engineered. Sometimes you can overthink the problem. Perhaps that means trying to develop a generalized algorithm that can be reused to solve many problems, when the situation calls for a fast, basic solution to a single problem. Subramaniam cited Occam’s Razor: When choosing between two solutions, the simplest may be the best.

Simple is not terse. Program source code should be concise, which means that it’s small, but also clearly communicate the programmer’s intent. By contrast, something that’s terse may still execute correctly when compiled into software, but the human understanding may be lost. “Don’t confuse terse with concise,” warns Subramaniam. “Both are really small, but terse code is waiting to hurt you when you least expect it.”