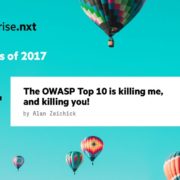 I’m #1! Well, actually #4 and #7. During 2017, I wrote several article for Hewlett Packard Enterprise’s online magazine, Enterprise.nxt Insights, and two of them were quite successful – named as #4 and #7 in the site’s list of Top 10 Articles for 2017. 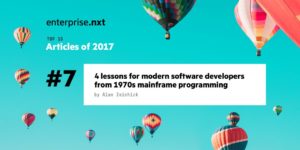 Article #7 was, “4 lessons for modern software developers from 1970s mainframe programing.” Based entirely on my own experiences, the article began,

Eight megabytes of memory is plenty. Or so we believed back in the late 1970s. Our mainframe programs usually ran in 8 MB virtual machines (VMs) that had to contain the program, shared libraries, and working storage. Though these days, you might liken those VMs more to containers, since the timesharing operating system didn’t occupy VM space. In fact, users couldn’t see the OS at all.

In that mainframe environment, we programmers learned how to be parsimonious with computing resources, which were expensive, limited, and not always available on demand. We learned how to minimize the costs of computation, develop headless applications, optimize code up front, and design for zero defects. If the very first compilation and execution of a program failed, I was seriously angry with myself.

Please join me on a walk down memory lane as I revisit four lessons I learned while programming mainframes and teaching mainframe programming in the era of Watergate, disco on vinyl records, and Star Wars—and which remain relevant today. 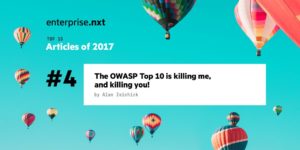 Software developers and testers must be sick of hearing security nuts rant, “Beware SQL injection! Monitor for cross-site scripting! Watch for hijacked session credentials!” I suspect the developers tune us out. Why? Because we’ve been raving about the same defects for most of their careers. Truth is, though, the same set of major security vulnerabilities persists year after year, decade after decade.

The industry has generated newer tools, better testing suites, Agile methodologies, and other advances in writing and testing software. Despite all that, coders keep making the same dumb mistakes, peer reviews keep missing those mistakes, test tools fail to catch those mistakes, and hackers keep finding ways to exploit those mistakes.

One way to see the repeat offenders is to look at the OWASP Top 10, a sometimes controversial ranking of the 10 primary vulnerabilities, published every three or four years by the Open Web Application Security Project.

The OWASP Top 10 list is not controversial because it’s flawed. Rather, some believe that the list is too limited. By focusing only on the top 10 web code vulnerabilities, they assert, it causes neglect for the long tail. What’s more, there’s often jockeying in the OWASP community about the Top 10 ranking and whether the 11th or 12th belong in the list instead of something else. There’s merit to those arguments, but for now, the OWASP Top 10 is an excellent common ground for discussing security-aware coding and testing practices.

Click the links (or pictures) above and enjoy the articles! And kudos to my prolific friend Steven J. Vaughan-Nichols, whose articles took the #3, #2 and #1 slots. He’s good. Damn good.

The future tech user-interface: It’s all about speech