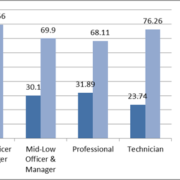 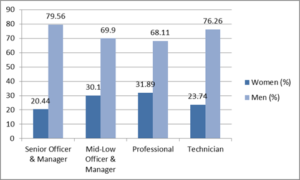 In the United States, Sunday, May 14, is Mother’s Day. (Mothering Sunday was March 27 this year in the United Kingdom.) This is a good time to reflect on the status of women of all marital status and family situations in information technology. The results continue to disappoint.

According to the Unites States Department of Labor, 57.2% of all women participate in the labor force in the United States. 46.9% of the people employed in all occupations are women. So far, so good. Yet when it comes to information technology, women lag far, far behind. Based on 2014 stats:

The job area with the highest projected growth rate over the next few years will be information security analysts, says Labor. A question is, will women continue to be underrepresented in this high-paying, fast-growing field? Or will the demand for analysts provide new opportunities for women to enter into the security profession? Impossible to say, really.

The U.S. Equal Employment Opportunity Commission (EEOC) shows that the biggest high tech companies lag behind in diversity. That’s something that anyone working in Silicon Valley can sense intuitively, in large part due to the bro culture (and brogrammer culture) there. Says the EEOC’s extensive report, “Diversity in High Tech,”

However, other sources note that stereotyping and bias, often implicit and unconscious, has led to underutilization of the available workforce. The result is an overwhelming dominance of white men and scant participation of African Americans and other racial minorities, Hispanics, and women in STEM and high tech related occupations. The Athena Factor: Reversing the Brain Drain in Science, Engineering, and Technology, published data in 2008 showing that while the female talent pipeline in STEM was surprisingly robust, women were dropping out of the field large numbers. Other accounts emphasize the importance of stereotypes and implicit bias in limiting the perceived labor pool (see discussion below).

Moughari et al., 2012 noted that men comprise at least 70 percent of graduates in engineering, mathematics, and computer science, while women dominate in the lower paying fields. Others point out that in this is not uniformly the case in all science and math occupations and that, while underrepresented among those educated for the industry, women and minorities are more underrepresented among those actually employed in the industry. It has been shown, for example, that men are twice as likely as women to be hired for a job in mathematics when the only difference between candidates is gender.

Women account for relatively small percentages of degree recipients in certain STEM fields: only 18.5 percent of bachelor’s degrees in engineering went to women in 2008.

Women Heading for the Exit

The EEOC report is very discouraging in its section on Existing Tech & Related Fields:

Over time, over half of highly qualified women working in science, engineering and technology companies quit their jobs. In 2013, just 26 percent of computing jobs in the U.S. were held by women, down from 35 percent in 1990, according to a study by the American Association of University Women. Although 80 percent of U.S. women working in STEM fields say they love their work, 32 percent also say they feel stalled and are likely to quit within a year. Research by The Center for Work-Life Policy shows that 41 percent of qualified scientists, engineers and technologists are women at the lower rungs of corporate ladders but more than half quit their jobs.

Based on a survey and in-depth interviews of female scientists, the report observes:

The EEOC report adds that in tech, only 20.44% of executives, senior officials and managers are women – compared to 28.81% in all private industries in the U.S. Women certainly are succeeding in tech, and there are some high-profile women executives in the field —think Meg Whitman at HP, Marissa Mayer at Yahoo (now heading for the exit herself with a huge payout), Sheryl Sandberg at Facebook, Susan Wojcicki at YouTube, Virginia Rometty at IBM, Safra Catz at Oracle, and Ursula Burns at Xerox. That’s still a very short list. The opportunities for and presence of women in tech remain sadly underwhelming.

Save yourself, save your corporate assets, by blocking spearphishing