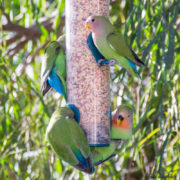 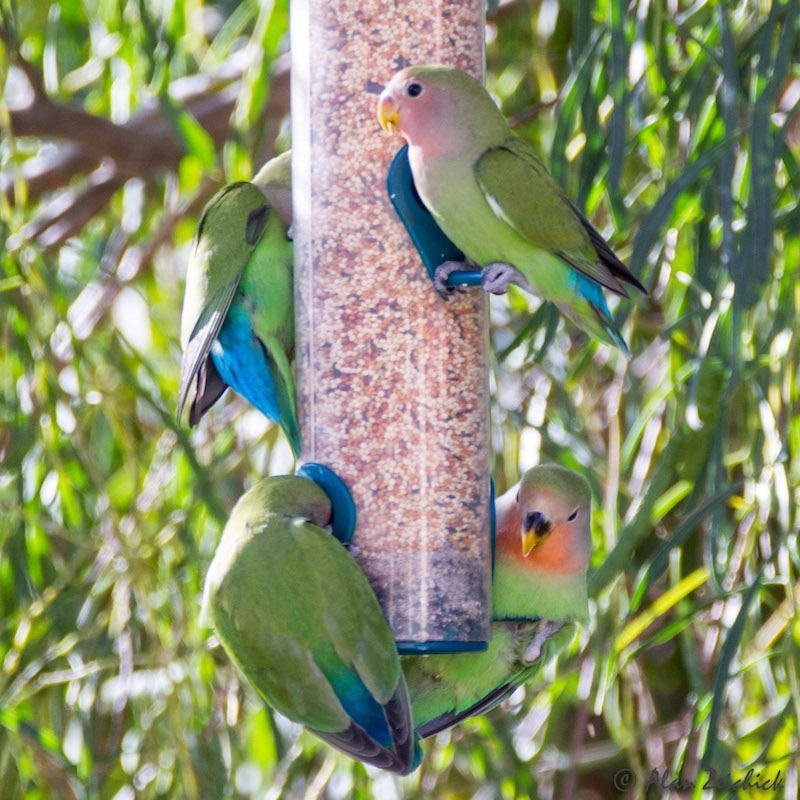 When we moved to Arizona, we were surprised and delighted to see funny little parrots flying around our garden. Turns out that the rosy-faced lovebirds (which used to be called peach-faced lovebirds, but we can’t get used to the new name) are now resident in greater Phoenix.

These delightful birds are natives of Africa but were released into the Arizona desert either intentionally or accidentally. In any case, they are thriving. Says the Wikipedia,

It inhabits dry, open country in southwest Africa. Its range extends from southwest Angola across most of Namibia to the lower Orange River valley in northwest South Africa. It lives up to 1,600 metres above sea-level in broad-leaved woodland, semi-desert, and mountainous areas. It is dependent on the presence of water sources and gathers around pools to drink.

Escapes from captivity are frequent in many parts of the world and feral birds dwell in metropolitan Phoenix, Arizona, where they live in a variety of habitats, both urban and rural. Some dwell in cacti and others have been known to frequent feeders in decent sized flocks.

A 2013 story in the Arizona Republic goes farther about the Agapornis roseicollis:

Troy Corman of the Arizona Field Ornithologists, an organization of birders and professionals dedicated to public knowledge of the state’s avian inhabitants, was unsurprised by my fascination.

“These spunky and noisy, bright-green birds seem to attract a lot of attention,” he said.

Their unpredictable visits to city parks and backyard bird baths are said to be huge hits with residents, but the birds are not common sights. Most people I’ve spoken to immediately knew the birds I was talking about but had seen them just once or twice.

Corman co-wrote his organization’s status report on the lovebirds of Phoenix, explaining that they’ve been on the loose as feral flocks since at least the mid-1980s. Their breeding success here — and only here, among places the birds may have escaped within the United States — apparently owes to the comfortably dry and warm climate, ready availability of water and good supply of foods from native and exotic plants, including palm fruit, cactus fruit, apples and various seed pods, including the paloverde’s.

We had lovebirds in our garden in 2014 and 2015, but didn’t see any last year. However, now we are hosting them again on our feeders. This morning, we had six of those beautiful birds. Yay! 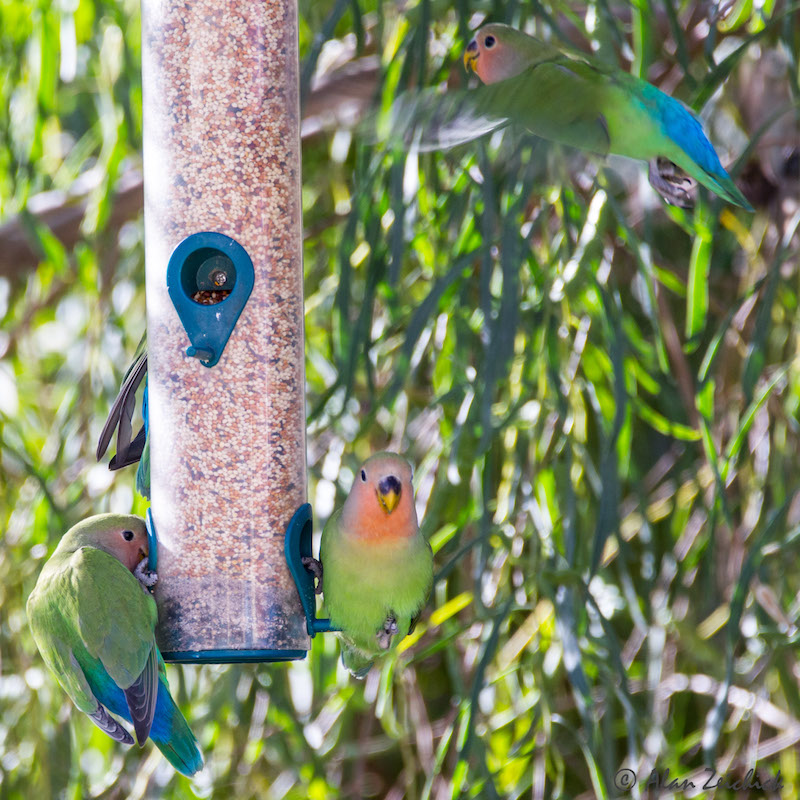 Bring a friend to worship services with you