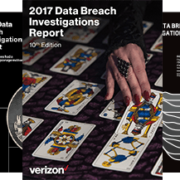 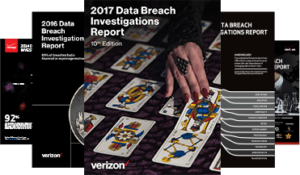 Did you know that last year, 75% of data breaches were perpetrated by outsiders, and fully 25% involved internal actors? Did you know that 18% were conducted by state-affiliated actors, and 51% involved organized criminal groups?

That’s according to the newly release 2017 Data Breach Investigations Report from Verizon. It’s the 10th edition of the DBIR, and as always, it’s fascinating – and frightening at the same time.

The most successful tactic, if you want to call it that, used by hackers: stolen or weak (i.e., easily guessed) passwords. They were were used by 81% of breaches. The report says that 62% of breaches featured hacking of some sort, and 51% involved malware.

More disturbing is that fully 66% of malware was installed by malicious email attachments. This means we’re doing a poor job of training our employees not to click links and open documents. We teach, we train, we test, we yell, we scream, and workers open documents anyway. Sigh. According to the report,

People are still falling for phishing—yes still. This year’s DBIR found that around 1 in 14 users were tricked into following a link or opening an attachment — and a quarter of those went on to be duped more than once. Where phishing successfully opened the door, malware was then typically put to work to capture and export data—or take control of systems.

We should not be surprised that the DBIR fingers ransomware as a major tool in the hacker’s toolbox:

Ransomware is the latest scourge of the internet, extorting millions of dollars from people and organizations after infecting and encrypting their systems. It has moved from the 22nd most common variety of malware in the 2014 DBIR to the fifth most common in this year’s data.

The Verizon report spends a lot of time on ransomware, saying,

Encouraged by the profitability of ransomware, criminals began offering ransomware-as-a-service, enabling anyone to extort their favorite targets, while taking a cut of the action. This approach was followed by a variety of experiments in ransom demands. Criminals introduced time limits after which files would be deleted, ransoms that increased over time, ransoms calculated based on the estimated sensitivity of filenames, and even options to decrypt files for free if the victims became attackers themselves and infected two or more other people. Multi-level marketing at its finest!

And this, showing another alarming year-on-year increase:

Perhaps the most significant change to ransomware in 2016 was the swing away from infecting individual consumer systems toward targeting vulnerable organizations. Overall, ransomware is still very opportunistic, relying on infected websites and traditional malware delivery for most attacks. Looking again through the lens of DBIR data, web drive-by downloads were the number one malware vector in the 2016 report, but were supplanted by email this year. Social actions, notably phishing, were found in 21% of incidents, up from just 8% in the 2016 DBIR. These emails are often targeted at specific job functions, such as HR and accounting—whose employees are most likely to open attachments or click on links—or even specific individuals.

The DBIR covers everything from cyber-espionage to the dangers caused by failing to keep up with patches, fixes, and updates. There are also industry-specific breakouts, covering healthcare, finance, and so-on. It’s a big report, but worth reading. And sharing.

No security plan? It’s like riding a bicycle in traffic in the rain without...

Why am I being spammed by the American Bar Association?
Scroll to top