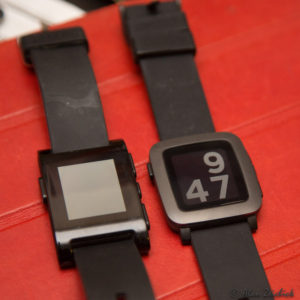 I was dismayed this morning to find an email from Pebble — the smart watch folks — essentially announcing their demise. The company is no longer a viable concern, says the message, and the assets of the company are being sold to Fitbit. Some of Pebble’s staff will go to Fitbit as well.

This is a real loss. The Pebble is an excellent watch. I purchased the original monochrome-screen model by signing onto their Kickstarter campaign, back in April 2012, for an investment of $125.

The Kickstarter watch’s screen became a little flakey after a few years. I purchased the Pebble Time – a much-improved color version – in May 2016, for the odd price of $121.94 through Amazon. You can see the original Pebble, with a dead battery, on the left, and the Pebble Time on the right. The watchface I’ve chosen isn’t colorful, so you can’t see that attribute.

I truly adore the Pebble Time. Why?

While I love the concept of the Apple Watch, it’s too complicated. The battery life is far too short. And I don’t need the extra functions. The Pebble Time is (or rather was) far less expensive.

Fortunately, my Pebble Time should keep running for a long, long time. Don’t know what will replace it, when the time comes. Hopefully something with at least a week of battery life.

Here’s the statement from Pebble:

Fitbit has agreed to acquire key Pebble assets. Due to various factors, Pebble can no longer operate as an independent entity, and we have made the tough decision to shut down the company. The deal finalized today preserves as much of Pebble as possible.

Pebble is ceasing all hardware operations. We are no longer manufacturing, promoting, or selling any new products. Active Pebble models in the wild will continue to work.

Making Awesome Happen will live on at Fitbit. Much of our team and resources will join Fitbit to deliver new “moments of awesome” in future Fitbit products, developer tools, and experiences. As our transition progresses, we’ll have exciting new stories to tell and milestones to celebrate.

It’s no doubt a bittersweet time. We’ll miss what we’re leaving behind, but are excited for what the future holds. It will be important for Pebblers to extend a warm welcome to Fitbit—as fans and customers—sharing what they love about Pebble and what they’d like to see next.

No honor: You can’t trust cybercriminals any more
Scroll to top