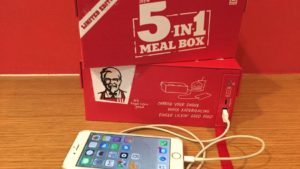 New of out India is  KFC (which many of us grew up calling Kentucky Fried Chicken) has introduced the Watt-a-Box, which says on its side “Charge your phone while experiencing finger lickin’ good food.” (That last part may be debatable.)

According to the Times of India,

NEW DELHI: KFC garnered a lot of accolades for its recently launched 5-in-1 Meal Box. And the fast-food chain has now introduced an all new ‘gadgety’ variant of the same box.

The limited edition box comes with a built-in power bank. Dubbed as ‘Watt a Box,’ it lets you charge your smartphone as you go about enjoying your meal.

KFC has said that a few lucky customers at select KFC stores in Mumbai and Delhi will get a chance to have their 5-in-1 Meal served in ‘Watt a Box’. Along with this, users can also participate in an online contest on KFC India’s Facebook page and win more of these limited edition boxes.

We are lacking a number of details. Is the box’s charger removable and reusable, or is it a one-time-use thing? If so, what a waste of electronics and battery tech. What about disposal / recycling the battery? And — eww — will everything get finger-lickin’ greasy?

The Watt-a-Box. Watt an idea.