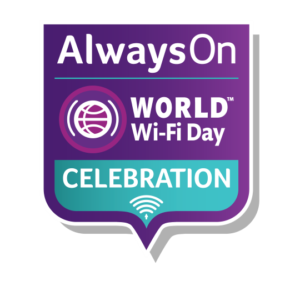 WiFi is the present and future of local area networking. Forget about families getting rid of the home phone. The real cable-cutters are dropping the Cat-5 Ethernet in favor of IEEE 802.11 Wireless Local Area Networks, generally known as WiFi. Let’s celebrate World WiFi Day!

There are no Cat-5 cables connected in my house and home office. Not one. And no Ethernet jacks either. (By contrast, when we moved into our house in the Bay Area in the early 1990s, I wired nearly every room with Ethernet jacks.) There’s a box of Ethernet cables, but I haven’t touched them in years. Instead, it’s all WiFi. (Technically, WiFi refers to industry products that are compatible with the IEEE 802.11 specification, but for our casual purposes here, it’s all the same thing.)

My 21” iMac (circa 2011) has an Ethernet port. I’ve never used it. My MacBook Air (also circa 2011) doesn’t have an Ethernet port at all; I used to carry a USB-to-Ethernet dongle, but it disappeared a long time ago. It’s not missed. My tablets (iOS, Android and Kindle) are WiFi-only for connectivity. Life is good.

The first-ever World WiFi Day is today — June 20, 2016 . It was declared by the Wireless Broadband Alliance to

be a global platform to recognize and celebrate the significant role Wi-Fi is playing in getting cities and communities around the world connected. It will champion exciting and innovative solutions to help bridge the digital divide, with Connected City initiatives and new service launches at its core.

Sadly, the World WiFi Day initiative is not about the wire-free convenience of Alan’s home office and personal life. Rather, it’s about bringing Internet connectivity to third-world, rural, poor, or connectivity-disadvantaged areas. According to the organization, here are eight completed projects:

It’s a worthy cause. Happy World WiFi Day, everyone!