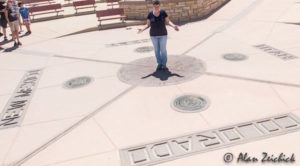 We drove slightly more than 2,500 miles (4,000 kilometers), my wife and I, during a weeklong holiday. We explored different states in the western United States: Arizona (where we live), Colorado, New Mexico and Wyoming. The Rocky Mountains are incredible. Most of our vacation was at altitudes above 6,000 feet (1,800 meters). Many of the mountain peaks were above 14,000 feet (4,200 meters), and one road went above 11,000 feet (3,300 meters). Exciting!

The adventure involved bringing only smartphones, one running Android, one running iOS. We used mobile apps for navigation, for communication, for photography, for reading, for social media, for finding hotels and restaurants, just about everything.

We learned that apps only seem to run well when there is copious bandwidth, either WiFi at a hotel or a fast cellular data link. If a smartphone registered 4G or LTE, all was good. If the phone indicated that the connection was EDGE, GPRS or 3G, all bets were off. It’s not that data loaded slowly. That would be expected. It’s that the apps would crash, or time out, or posting data would fail, or nothing would happen at all. Many modern apps expect or demand lots and lots of bandwidth.

I’m not talking here about apps running completely offline. That’s an entirely different conversation. I’m talking about apps not gracefully handling situations where the bandwidth is narrower than a drinking straw.

Many developers test out their mobile apps using simulators. That, or on devices that have very high bandwidth connections, such an office WiFi network or the type of high-speed network that you’ll find in Silicon Valley, New York City, or other major tech hubs around the world. Having lots of mobile bandwidth is undoubtedly a blessing for developers, but for many consumers, that’s simply not the case.

Lots of customers live in areas with poor bandwidth, or find themselves traveling in places where connectivity is slow or intermittent. Given the use cases for mobile devices—that is, they are frequently used when not at home or in an office—optimizing apps for bad bandwidth should be mandatory. Hey, this isn’t about streaming 1080p movies. This is about being able to use a search engine, or call up a map, or be able to find a hotel room.

Will people use your apps in poor-bandwidth or intermittent-bandwidth situations? If so, here are some steps you can do to improve the user experience:

Look to the intranet for shared corporate data — it’s a Big Data pr...

What to do when, not if, your cloud goes down
Scroll to top