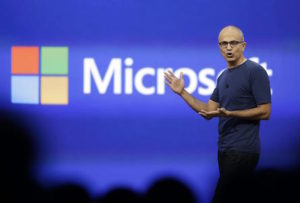 Microsoft has evolved considerably. It’s moved from its early days selling developer tools, or its era focusing on Windows and Office, or its run as a server software maker, or its first iteration as a cloud/online services company. Despite all the myriad changes, it’s always been true that Microsoft does not excel at innovation.

In fact, when the company focuses on innovation, it often misses with its products and pricing. Features are implemented badly, bugs proliferate, messages are muddled and strategy appears non-existent.

When, by contrast, Microsoft focuses on execution, it does much, much better. Software and services are about getting the details right, and that means understanding the customers, not slamming out a bewildering product that has state-of-the-art technology but doesn’t make sense to anyone.

This is true whether you are talking about operating systems like Windows, or back-end products like Bing or SharePoint, or mobile phones. The new, innovative, visionary, ground-breaking products (or product upgrades) nearly always disappoint.

Reading new CEO Satya Nadella’s letter to his employees, I am concerned that Microsoft doesn’t understand that customers want excellent products. That means execution more than it means innovation.

Nadella’s letter, called “Bold Ambition & Our Core,” was published on July 10. Right up front, Nadella says, “The day I took on my new role I said that our industry does not respect tradition – it only respects innovation.”

That scares me. I think he misses the point.

At our core, Microsoft is the productivity and platform company for the mobile-first and cloud-first world. We will reinvent productivity to empower every person and every organization on the planet to do more and achieve more.

What does it mean to reinvent productivity? I’m sure it means more than carrying around a Microsoft Surface Pro 3 device that tries to be both a notebook computer and a tablet, but doesn’t truly succeed in either configuration.

Productivity for us goes well beyond documents, spreadsheets and slides. We will reinvent productivity for people who are swimming in a growing sea of devices, apps, data and social networks. We will build the solutions that address the productivity needs of groups and entire organizations as well as individuals by putting them at the center of their computing experiences.

It’s a beautiful concept – but so far, Microsoft’s bread and butter has been specifically documents, spreadsheets and slides. Is he talking about SharePoint and Yammer?

In the 3,000-word missive, Nadella spends a lot of time talking about specific areas. He talks about “digital work and life experiences,” which are productivity enhancers designed for the mobile-first and cloud-first world. He talks about context-rich connections between experience, such as with the Cortana app on Windows Phone. He talks about the cloud, where

the combination of Azure and Windows Server makes us the only company with a public, private and hybrid cloud platform that can power modern business. We will transform the return on IT investment by enabling enterprises to combine their existing datacenters and our public cloud into one cohesive infrastructure backplane.

The single biggest digital life category, measured in both time and money spent, in a mobile-first world is gaming. We are fortunate to have Xbox in our family to go after this opportunity with unique and bold innovation. Microsoft will continue to vigorously innovate and delight gamers with Xbox.

What’s missing from Nadella’s call-to-arms letter? You won’t read much specifically about Windows Phone, about notebooks and desktop computers, about desktop Windows, or even traditional Office.

You also didn’t see much about execution, about delivering excellent products. All I read is innovate, innovate, innovate. Ideas are nice, Mr. Nadella, but I’d like to see a company that actually delights its customers, instead of frustrating them with its latest upgrades.

Developer programs are a good investment in your employees

Look to the intranet for shared corporate data — it’s a Big Data pr...
Scroll to top