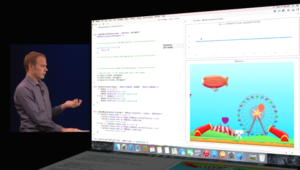 SAN FRANCISCO — I expected a new version of OS X, the operating system for Mac desktops and notebooks. I expected a new version of iOS, the operating system for iPhones and iPads. I did not expect a new programming language. Yet that’s what we got at Apple’s Worldwide Developers Conference, held here this week. And I’m delighted.

Along with the previews of OS X 10.10 “Yosemite” and iOS 8, Apple showed Swift, a language that runs inside its familiar Xcode integrated development environment.

Swift is designed primarily for safety. As Apple puts it:

Swift eliminates entire classes of unsafe code. Variables are always initialized before use, arrays and integers are checked for overflow, and memory is managed automatically. Syntax is tuned to make it easy to define your intent—for example, simple three-character keywords define a variable (var) or constant (let). The safe patterns in Swift are tuned for the powerful Cocoa and Cocoa Touch APIs. Understanding and properly handling cases where objects are nil is fundamental to the frameworks, and Swift code makes this extremely easy. Adding a single character can replace what used to be an entire line of code in Objective-C. This all works together to make building iOS and Mac apps easier and safer than ever before.

Obviously we have not had a chance to work with Swift directly. However, it appears to be a very easy language to learn, especially for developers who are used to Objective-C. It’s designed for Apple’s Cocoa and Cocoa Touch libraries, is built with the familiar and stable LLVM compiler, and creates the same runtime as Objective-C.

Apple says Swift programs are fast. The company claims that a complex object sort will run in Objective-C about 2.8x faster than in Python. But if you use Swift, it runs 3.9x faster.

Learn more about the Swift announcement, as well as a ton of new APIs, in Rob Marvin’s article, “Apple announces Swift programming language, new SDK and developer features at WWDC.”

A neat feature of Swift is what Apple calls “playgrounds,” where you can see how the code runs as you write it—without building a new version. That’s cool. Swift isn’t ready yet, but you can check out Apple’s preliminary documentation, including a tour and language guide.

Swift is a cross-platform language, if you define “cross platform” to mean “both of Apple’s platforms.” Yes, you can use Swift to write apps for OS X and for iOS, and because it creates the same runtimes as Objective-C, you should be able to run Swift applications on older versions of those operating systems, not only OS X 10.10 and iOS 8. What you can’t do, and probably never will do, is run Swift apps on competing platforms. No Android, no Windows Phone. Given that the language does target the Cocoa and Cocoa Touch libraries, that’s clearly no surprise.

Most mobile app developers already target iOS first, even though there are more Android devices than iPhones and iPads. Swift won’t change that, and in fact it will likely make iOS development even more attractive.

On the desktop/notebook side, developers writing native software probably target Windows first because of the huge installed base of machines. It’s unlikely that Swift will change behaviors there. But then again, writing desktop/notebook software truly is becoming a niche activity.