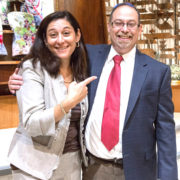 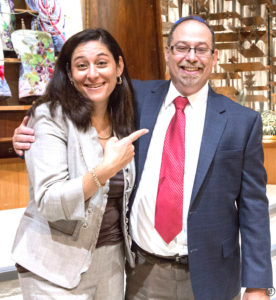 Did you know that we are safeguarding a Holocaust Torah at Peninsula Temple Sholom? You can see the scroll in the Raiskin Torah Center building. It’s in the display case with the yellow Torah cover dedicated in loving memory of Cantor Israel Reich z”l and Helen Raiskin z”l.

The Holocaust scroll is not a “kosher” scroll, fit to be used for a Torah service or reading. That’s because the scroll’s parchment was heavily damaged during the Holocaust era. Rabbi Gerald Raiskin z”l agreed to take the scroll in as a memorial, as a silent witness to that horrific era. (The Hebrew description for a non-kosher Torah scroll is pasul, which roughly means invalid or unfit.)

I was reminded of the Holocaust scroll in January when PTS Executive Director Sandy Silverstein shared with me a letter from the Memorial Scrolls Trust, an organization in London. The letter was dated December 8, 2003 (13 Kislev 5764) and was addressed to Rabbi Raiskin, Rabbi David Wirtschafter, then the associate rabbi, and Gary Pollard, who was synagogue president at the time. Much of the letter was focused on fundraising for the Memorial Scrolls Trust, but it also said:

Since 1973 your congregation has been guardian of Scroll Number 890 from Rakovnik. This is one of the 1564 Czech Torah Scrolls collected by the Nazis from Bohemia and Moravia, which were eventually rescued by Westminster Synagogue and brought from Prague to London in 1964. Each Scroll is a symbol of a people and its indestructible faith, which must surely have been a continuing source of inspiration to your community.

The Czech Torah Scroll arrived at PTS in 1973 — and 2014 is the 50th anniversary of the rescue and distribution of the scrolls. As the Trust explains on its website:

On a wet and windy day in February 1964, the first of two consignments of scrolls arrived at Kent House in London, the home of Westminster Synagogue. They were met by Rabbi Reinhart and a group of his congregants. They were unloaded from the trucks which had crossed Europe from Prague and laid out in the marble entrance hall of the Synagogue, like so many lifeless bodies in the polythene shrouds that had protected them in the Michle Synagogue.

On the second floor of the old Victorian building (the original house had been the home of Queen Victoria’s father), wooden shelves had been erected to receive the scrolls. They were carefully laid out, side by side, with their labels showing. As the labels did not always tally with the original lists, one of the helpers’ first tasks was to re-label them with a new series of numbers which could be entered on to index cards, with any information that could be gleaned about the scroll, its condition, place of origin and any other information available.

The task of examining every one of the 1,564 scrolls could then begin, for each one had to be carefully unrolled, scrutinised and recorded. Some were in appalling condition, burnt, damaged by water or otherwise torn and soiled. Many were too bad to be used again, but many were good enough to merit careful cleaning and restoration. The new life of the Scrolls was about to begin.

The 50th Anniversary was commemorated at a special worship service on February 9 in London. You can watch a seven-minute video from that service at: http://youtu.be/QeXX3Bubr6o

Next Generation of Leadership

April Glatt — a member of the Board of Trustees since 2008 — has been elected as the next president of the congregation. The election took place in the February Board meeting, and her term will begin on July 1, 2014.

April’s work on the Board has been exemplary as chair of a wonderful congregational fundraiser, as membership chair, and for the past two years, as chair of the Board’s Personnel Committee. April is a close advisor, as well as a dear friend. I am incredibly excited about April’s vision for the congregation. Under her leadership, Peninsula Temple Sholom will go from strength to strength. As we say five times each year when we conclude reading one book of the Torah and transition to the next, chazak, chazak v’nitchazek!

Hearing You at the Annual Meeting

This year, we are transforming the Annual Meeting into an Annual Meeting & Conversation. The program will still have reports — but the reports will be fewer and shorter. In the spirit of Kolot, we will add opportunities for everyone to get to know one another better, and to provide meaningful input to the clergy, staff, and lay leadership of the congregation.

The Annual Meeting & Conversation will take place on Wednesday evening, May 21. Please mark your calendar — and please add your voice to the conversation.

Weights and measures: PTS by the numbers

Do you want to be a billionaire?
Scroll to top