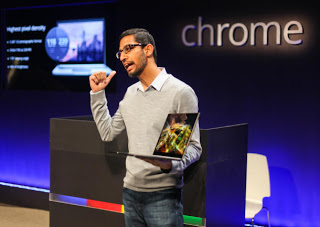 What is going on at Google? I’m not sure, and neither are the usual pundits.

Last week, Google announce that Andy Rubin, the long-time head of the Android team, is moving to another role within the company, and will be replaced by Sundar Pichai — the current head of the company’s Chrome efforts.

Having exceeded even the crazy ambitious goals we dreamed of for Android—and with a really strong leadership team in place—Andy’s decided it’s time to hand over the reins and start a new chapter at Google. Andy, more moonshots please!

Going forward, Sundar Pichai will lead Android, in addition to his existing work with Chrome and Apps. Sundar has a talent for creating products that are technically excellent yet easy to use—and he loves a big bet. Take Chrome, for example. In 2008, people asked whether the world really needed another browser. Today Chrome has hundreds of millions of happy users and is growing fast thanks to its speed, simplicity and security. So while Andy’s a really hard act to follow, I know Sundar will do a tremendous job doubling down on Android as we work to push the ecosystem forward.

What is the real story? The obvious speculation is that Google may have too many mobile platforms, and may look to merge the Android and Chrome OS operating systems.

Ryan Tate of Wired wrote, in “Andy Rubin and the Great Narrowing of Google,”

The two operating system chiefs have long clashed as part of a political struggle between Rubin’s Android and Pichai’s Chrome OS, and the very different views of the future each man espouses. The two operating systems, both based on Linux, are converging, with Android growing into tablets and Chrome OS shrinking into smaller and smaller laptops, including some powered by chips using the ARM architecture popular in smartphones.

There’s a certain logic to consolidating the two operating systems, but it does seem odd that the man in charge of Android – far and away the more successful and promising of the two systems – did not end up on top. And there are hints that the move came as something of a surprise even inside the company; Rubin’s name was dropped from a SXSW keynote just a few days before the Austin, Texas conference began.

Other pundits seem equally confused. Hopefully, we’ll know what’s on going on soon. Registration for Google’s I/O conference opened – and closed – on March 13. If you blinked, you missed it. We’ll obviously be covering the Android side of this at our own AnDevCon conference, coming to Boston on May 28-31.

Is Big Data a fancy way of saying Big Social?