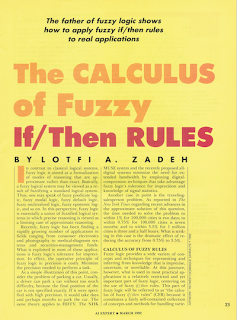 So began one of the most important technical articles published by AI Expert Magazine during my tenure as its editor: “The Calculus of Fuzzy If/Then Rules,” by Lotfi A. Zadah, in March 1992.

Even then, more than 20 years ago, Dr. Zadeh was revered as the father of fuzzy logic. I recall my interactions with him on that article very fondly.

I was delighted to learn that Fundacion BBVA, the philanthropic foundation of the Spanish bank BBVA, has recognized Dr. Zadeh with their 2012 Frontiers of Knowledge Award.

To quote from the Web page for the award,

The BBVA Foundation Frontiers of Knowledge Award in the Information and Communication Technologies (ICT) category has been granted in this fifth edition to the electrical engineer Lotfi A. Zadeh, “for the invention and development of fuzzy logic.” This “revolutionary” breakthrough, affirms the jury in its citation, has enabled machines to work with imprecise concepts, in the same way humans do, and thus secure more efficient results more aligned with reality. In the last fifty years, this methodology has generated over 50,000 patents in Japan and the U.S. alone.

The key paper, the one that started it all, was “Fuzzy Sets,” published by Dr. Zadeh in June 1965 in the journal “Information and Control.” You can read the paper here as a PDF. I would not call it light reading.

Congratulations, Dr. Zadeh, for your many contributions to computer science and software engineering – and to the modern world.

Big Data, by any other name, would smell as sweet