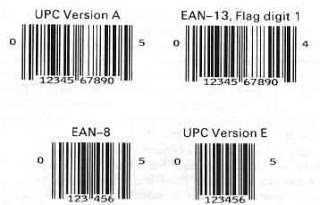 Let us spend a moment pondering the barcode. Barcodes are everywhere. Everywhere. Every time you visit a grocery store, cashiers use barcodes to ring up your purchases. That is, unless you choose the self checkout, where you scan them yourself. Airlines send barcodes to phones for paperless checking. Barcodes track warehouse inventory and adorn corporate asset tags.

The new QR codes appear in magazine ads, bus stop signs, overhead billboards. Aim your mobile phone camera and click to visit a website. At Google IO in May, attendee badges had QR codes linked to vCard profiles — instead of exchanging business cards, you just zap someone’s card with your phone and load their info right into your contact database. After Google IO, I immediately ordered a new set of business cards with a QR code printed on the back.

Back in the 1980s I had a barcode reader for my HP-41C programmable calculator. While the HP-41C generally used magnetic cards for persistent storage, printed barcode sheets were used for ass distribution of binary information, including programs and data. (I still use the HP-41C, but the barcode reader is long gone.)

And don’t get me started about the :CueCat.

Barcodes are so ubiquitous that I’ve never given them even a second’s thought. They are simply a convenience when they work properly, an annoyance if they don’t scan. Thus, I was taken by surprise by the passing of Alan Haberman, lauded as the man who popularized the barcode, at least for supermarkets and other point-of-purchase applications.

While the late Mr. Haberman didn’t invent the barcode itself. he did push for the adoption of the IBM-invented Universal Product Code (UPC), which ended up as the standard for point-of-sale scanners. According to his obituary in the New York Times the UPC barcode made its public debut in 1974.

In a world of seemingly more advanced technologies – the mag strip, the EMV chip in European credit cards, RFID systems and the emerging near-field communications systems — the least common denominator is the low-tech barcode. Easy to create, easy to reproduce, easy to scan… what’s not to like? I’m sure we’ll be using UPC barcodes and QR codes for many decades to come, long after some of newer technologies have disappeared.

Cutting waste by getting lean, but without getting mean
Scroll to top