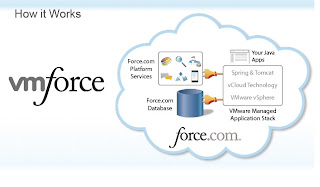 VMforce is a good idea. Java is perfect for cloud computing: As the original “run once, run anywhere” platform, what VMware and Salesforce have announced has the potential to revolutionize the Cloud, and offer arguably the most compelling platform for many enterprises.

I see VMforce – the fusion of VMware’s virtualization technology and Spring framework with Saleforce’s Cloud infrastructure – as breathing new life into enterprise Java. Let’s face it: With Sun absorbed into Oracle, it’s clear that the Java universe has entered a whole new era where some are wondering about its continued relevance.

Given strong competition from Microsoft, with the new Visual Studio 2010, .NET Framework 4.0 and the Windows Azure cloud platform, Java has certainly looked vulnerable, and I wouldn’t blame Java-centric enterprises for questioning their long-term commitment to the platform.

I’ve heard it said that the Java community is going to look outside of the Java Community Process (now controlled by Oracle) for innovation and leadership. SpringSource (now owned by VMware) is frequently cited as the future of enterprise Java – not the JCP. There’s a lot of truth to that.

And while I never envisioned any particular synergy between Java and Salesforce, the VMforce announcement shows that the “no software” company is much more creative, quite frankly, that I’d given them credit for. Certainly it’s encouraging that Saleforce is looking beyond its Apex programming language.

Let’s review what VMforce is supposed to be. VMware is putting a version of its vSphere virtualization management platform into Salesforce.com’s data centers. Developers create Spring-based Java applications using an Eclipse-based IDE. Those apps can use many Java features, like POJOs, JavaServer Pages and servlets, but can’t use some key Java EE features like Enterprise JavaBeans. The apps also can access Saleforce’s distributed database system.

Of course, it’s too early to truly evaluate VMforce – it’s not going to be available for many months. The developer preview doesn’t appear until this fall, according to the companies. So, please don’t interpret these comments as an endorsement of this specific offering, but rather of the notion of bringing Java into the Cloud.

That said, VMforce is the best news that I’ve heard in many months for the Java community. Kudos to VMware and Salesforce for excellent out-of-the-box, into-the-Cloud thinking.