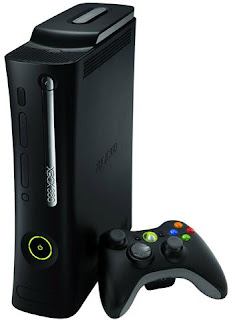 Microsoft today slashed the price of the Xbox 360 game console, which beginning on Friday will cost as little as $199. The system comes in three versions:

• Xbox 360 Arcade, $199.99 — includes the console and one wireless controller, and a tiny 256MB of of flash-based storage. No headset, no network cable, no HD audio/video cable, and no backwards compatibility with older Xbox games. Get this only if you’re super-cheap, or are buying a birthday present for someone you don’t like very much. Was $279.99.

With this price cut, Microsoft is trumpeting the sub-$200 price point, of course:

“We are thrilled to be the first next-generation console on the market to reach $199, a price that invites everyone to enjoy Xbox 360,” said Don Mattrick, senior vice president of the Interactive Entertainment Business at Microsoft. “Xbox 360 delivers amazing performance at an extraordinary value with the leading online service and best lineup of games, downloadable movies and TV shows available from a console. The majority of consumers make the decision to buy consoles once the price falls to this mark, making this an important milestone for consumers and the industry.”

However, with only 256MB of storage and no high drive, and no reverse compatibility, the Xbox 360 Arcade ain’t a good deal. Get the plain edition for $299.99.

Wi nøt trei a høliday in Sweden this yër?Penn Jillette for President?
Scroll to top