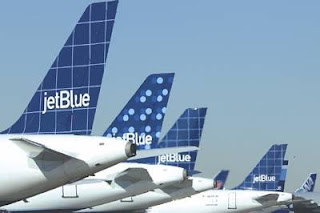 Yesterday, for the first time, I flew jetBlue on my regular route between San Francisco and New York’s JFK airport. I’m probably the last business traveler in America to try jetBlue. I will fly it again.

My default airline has long been United. As a Premier Executive traveler with United, I’ve been immune to many of their little inconveniences, such as extra fees for extra-legroom seats, or for checking two bags. However, on this New York trip, United’s fares were unconscionable, and jetBlue was literally half the price.

What did I find? A flight-reservation Web site that’s far easier to use than United’s. When I got to the airport, jetBlue had a much better waiting area, in SFO’s International Terminal, instead of the beat-up Terminal 3. (When Terminal 2 reopens after its major renovation, I expect jetBlue to move.)

Onboard, jetBlue had a nice clean Airbus A320, with comfortable coach-class seats. Lots of audio and video entertainment channels, which I didn’t watch. Delicious Dunkin’ Donuts coffee, instead of Starbucks, which is a huge plus for this East Coast native. Yummy snacks — animal crackers are better than trail mix. A friendly crew.

Frequent flier miles have a habit of becoming golden handcuffs, and can be a hard habit to break. As a United frequent flier with elite status, I get a special toll-free number with shorter queues, and a better change of getting an upgrade or catching an earlier flight. At SFO, Premier fliers have a shorter line to get through security. I get to board the flight earlier, which means there’s a better chance that I’ll get good overhead baggage compartment space. And of course, there are business class upgrades.

Given the price of air travel, it’s time to throw off the golden shackles. That’s not to say that I won’t fly United any more, or that I won’t still choose United if the cost is the same. However, jetBlue gets two thumbs up.