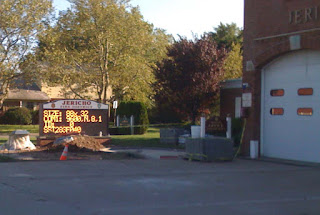 It’s funny to see kiosks and other devices with behind-the-scenes error messages.

• Airport flight monitors that are locked into a boot sequence

• Point-of-sale systems with a Blue Screen of Death

Yesterday, the external informational display at the Jericho, N.Y., fire station was locked in a setup pattern. (I pulled over to take this photo. Click to make it larger.) It was frozen that way for at least two hours. Whoops!

Generally, those errors are the result of lousy programming in an application, but it’s also sometimes caused by using an inappropriate software platform to run quasi-embedded applications.

I can’t speak to the fire department display, but with kiosks, you often have desktop operating systems (frequently, it’s Windows 98 running on an ancient PC) that are left running 24×7 with buggy apps that have poor memory management. Leave it alone long enough, and down it goes.

The case for commercial software componentsDo I have a good scence of humor?
Scroll to top