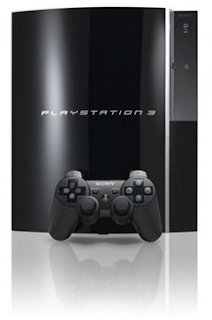 Yesterday, our new Sony Playstation 3 arrived. Our son took about 0.7 minutes to unpack the box, disconnect the old upconverting DVD player from our television and hook in the Playstation, sync up the Bluetooth controller and Blu-ray disc remote, tie the device into our home WiFi network and start watching a movie.

The decision to purchase a Playstation 3 was driven by a confluence of several factors.

1. We like to watch movies, and having seen how good a Blu-ray movie looks, we wanted it. Bad.

2. Netflix offers Blu-ray movies, at no additional price over regular ones. There aren’t many available now, but the number’s only going to increase.

3. Our flat-panel LCD TV is already at the optimal resolution, 1080p, for Blu-ray.

4. With the “format wars” between HD-DVD and Blu-ray over, we were willing to commit.

5. Our son had been hinting.

Interestingly, the Playstation 3 also acts as a Web browser. You can even plug a keyboard into one of its USB ports. However, it is a terrible Web browser. Simply terrible. Cross that application of the device off our list.

Thank you, United Nations, for the diplomatic passportDomain scammers: At least they’re up front about money
Scroll to top