The May 2, 2008, edition of Media Business had a detailed story about our launch of Systems Management News, featuring quotes from Ted Bahr (the “B” of BZ Media).

Bahr is facing one of the hardest-hit ad sectors, with computing, software, telecommunications advertising down 17.8% in revenue and 11.7% in pages last year compared with 2006, according to Business Information Network.

Nevertheless, Bahr is confident Systems Management News is well-positioned for when the economy starts to bounce back. “Any b-to-b print publication is ‘how-to’ in nature. But if you continue to do that, you’re going to be beaten by the Web,” he said. “With print, you want to stop the world twice a month and allow readers to step back and get some perspective, as opposed to the daily firehose from the Web.”

Robert Williams, VP-sales and marketing at Software FX, a data visualization components vendor, has bought ad space in the first two issues of Systems Management News. “The doom and gloom about print is overblown,” he said. “I still like to see things in print, and you’re going to get the news presented a little differently in a biweekly.”

In SD Times’ coverage of the latest in the Microsoft-Yahoo attempted takeover, David Worthington filed a story today about how Microsoft has withdrawn its $33/share offer.

To help illustrate the story, “Microsoft walks away from Yahoo buyout,” our Web team embedded some financial graphs onto the page. Interestingly, the easiest ones to embed came from a Google Gadget.

But what happens when you click on that Google Gadget? It takes you to Yahoo Finance! We rarely attend opening weekends, because we can’t stand crowded theatres. However, the early reviews for Iron Man made it seemed worth going… and it was worth it.

The movie was fast-paced and funny. Robert Downey Jr. made a great hero, delivering a character that lived up to Iron Man’s long-standing reputation as one of the most intellectually brilliant superheroes — one who wins due to the power of his brain and the cleverness of his inventions, not because of brawn or super powers.

Iron Man’s casting was solid, and the update of the movie to focus on Afghanistan was appropriate. The original comic books were set in Vietnam.

Some parts of the plot were extremely predictable. You could guess what would come as the final climax almost from the beginning of the film. But that’s okay; it was a good time.

Iron Man is the first of a trilogy which will roughly follow the comic-book story line of Tony Stark. We’re looking forward to Part II. 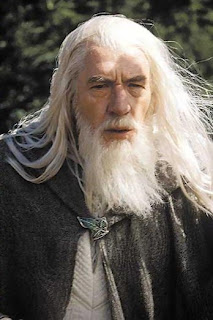 Peter Jackson’s cinematic trilogy, The Lord of the Rings, is a masterpiece. Particularly the extended editions, it’s hard to imagine movies that are better than his interpretations of those wonderful novels.

Jackson got nearly everything right. I’d quibble about the appearance and behavior of the Ents, the selfish personality of Elrond and the miserable depiction of Denethor, who seemed totally unfit to be Steward of Gondor. Everything else was just about perfect.

What’s been missing, of course, is J.R.R. Tolkien’s The Hobbit. More whimsical than the Lord of the Rings, The Hobbit is more magical. It’s the right fantasy book to start a young person with, before moving to the more complex, slower-paced and darker Lord of the Rings trilogy.

I’m delighted that Peter Jackson overcame the rights issues and profit-sharing arguments with MGM that stood in the way of his making The Hobbit. It’s equally delightful that Sir Ian McKellen will be back as Gandalf.

My feelings are more mixed about Jackson’s plan to create an original movie, set in the 60 years between The Hobbit and The Fellowship of the Ring. This as-yet-unnamed film is set to come out in 2011. Let’s hope Jackson doesn’t blow it!

Also, after giving this week’s conversations further thought, it is clear to me that it is not sensible for Microsoft to take our offer directly to your shareholders. This approach would necessarily involve a protracted proxy contest and eventually an exchange offer. Our discussions with you have led us to conclude that, in the interim, you would take steps that would make Yahoo! undesirable as an acquisition for Microsoft.

We regard with particular concern your apparent planning to respond to a “hostile” bid by pursuing a new arrangement that would involve or lead to the outsourcing to Google of key paid Internet search terms offered by Yahoo! today. In our view, such an arrangement with the dominant search provider would make an acquisition of Yahoo! undesirable to us for a number of reasons.

Accordingly, your apparent plan to pursue such an arrangement in the event of a proxy contest or exchange offer leads me to the firm decision not to pursue such a path. Instead, I hereby formally withdraw Microsoft’s proposal to acquire Yahoo!.

Hostile takeovers just aren’t Microsoft’s style. I never expected Ballmer to go to the shareholders; Microsoft isn’t Oracle. He’s also not desperate. Microsoft wants Yahoo, but it doesn’t need Yahoo. While Ballmer was prepared to raise his offer from $31 to $33 per share, he simply wasn’t hungry enough for the $37 that Yang wanted.

But as Ballmer concludes,

I still believe even today that our offer remains the only alternative put forward that provides your stockholders full and fair value for their shares. By failing to reach an agreement with us, you and your stockholders have left significant value on the table.

What is Microsoft up to? I believe that Ballmer still wants Yahoo. I also believe that the past three months have demonstrated that Yahoo is unlikely to recover and to become an Internet powerhouse again; its days are numbered.

Thus, there are a small number of options:

1. Yahoo pulls itself together and continues as a viable company. Likelihood: low

2. Someone else makes a compelling offer for Yahoo. Likelihood: low

3. Yahoo approaches Microsoft at some time in the future, and tries to negotiate a good deal. Likelihood: reasonable.

4. Microsoft waits for Yahoo to tank, and then makes another offer — potentially back to the original $31 per share, but potentially even lower. Likelihood: reasonable.

Thus, one can conclude that Ballmer is prepared to wait. The story isn’t over.

The real losers here may be Yahoo’s shareholders. They’re unlikely to get a better offer than the $33/share that Ballmer offered.