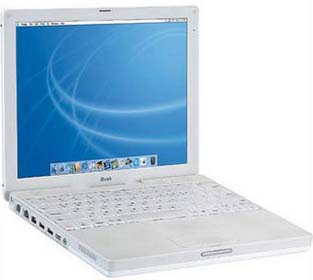 Here’s the story: I started out shopping for digital picture frames, but became disheartened after reading reviews that said that the units are hard to use and have compatibility issues. Also, the focus of the current crop of picture frames is on multimedia (sound and motion), and I just wanted to show still photographs.

So, I started to repurpose Tabby, an old Fujitsu T4010 TabletPC, into a digital picture frame. It should work fine, but Tabby was being balky and I didn’t feel like fussing with it.

After my son got a MacBook, we tried making Senshu into a Web terminal, but its slow processor and limited memory does a poor job with Firefox and Safari. So, the poor little iBook just sat in my closet waiting for the perfect application.

Being a digital picture frame is that application.

I created a limited user account called Photoframe on the machine, and configured that account to launch the photo screensaver after three minutes. (You get to it via System Preferences -> Desktop & Screen Saver -> Screen Saver -> Pictures Folder.) The directory for the photos is shared over the network, so that I can change the photos from my desktop. Energy Saver is configured to never let display or computer sleep.

As I type this, Senshu is sitting on a table next to my desk, acting like a perfect digital picture frame. I like how the screen saver zooms, moves and fades the pictures dynamically. The whole presentation is very attractive. Success!

• Experiment with an old low-resolution 15-inch flat-panel display, to see if it would be better than Senshu’s 12-inch display (which has a relatively modest viewing angle). The monitor may be more attractive as a picture frame than a laptop (which I’d then hide under the table).

• Play with the Energy Saver schedule settings, to put the notebook to sleep when I know that I won’t be in the office, and then wake it up automatically.

• Fix the Fujitsu tablet and turn it into a second digital picture frame.

The defibrillator and the cigarette vending machineThank you, United Nations, for the diplomatic passport
Scroll to top