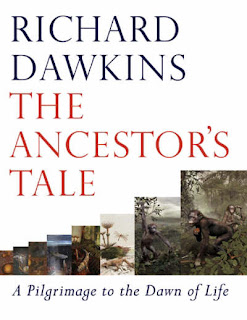 My feelings about Richard Dawkins are mixed. On one hand, the British evolutionary biologist is a brilliant scientist, and is credited with popularizing all sorts of concepts from selfish genes to memes. His books on science rank right up there with those from the late Stephen Jay Gould in breadth, scope and readability.

On the other hand, Dawkins’ strident, evangelical atheism detracts from his science. I have no problem with Dawkins being an atheist. However, his religious fervor to angrily preach the anti-religion message doesn’t help his other mission, to explain Darwinian evolutionary biology.

I’ve read Dawkins’ writings about atheism, most recently the best-selling The God Delusion, and I find them muddle-heading and unconvincing. Richard, stick to what you know — biology.

Thus, back to biology. I just finished rereading Dawkins’ great masterpiece, an evolutionary biology tour-de-force: The Ancestor’s Tale: A Pilgrimage to the Dawn of Evolution. Working backwards from humans, he traces evolution back through common ancestors (which he calls “concestors”).

If humans and chimpanzees are related, what might our most recent common ancestor have looked like? What about the common ancestor of all mammals? Of all animals? The common ancestors to animals and plants? You get the idea. It’s brilliantly researched and engagingly written. Sure, parts are slow going, particularly when Dawkins takes rambling sides trips into philosophy, but given the quality of the science, that’s forgiven.

The Ancestor’s Tale is best read one chapter at a time. That makes it a wonderful bed-side book or for taking on trips.

I’ve read most of his other books, and the ones above are the best.