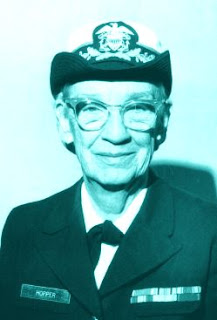 On March 1, a blog reader responded to the news about the 2006 ACM A.M. Turing Award — which recognized Fran Allen as the first female recipient of this honor — asking a pointed question:

I guess the Lady Admiral who wrote Fortran wasn’t very important… So I won’t bother to even name her. After all, she only worked for the U.S. Government and not a large conglomerate like IBM…

I asked the Association for Computing Machinery if the Turing Award committee had a response to this question. Here’s what they told me this morning.

“Good morning Alan, and thanks for your patience. We appreciate your interest in ACM’s Turing Award, and the issue it raises about women and technology. So let me explain how the process works.

“ACM’s A.M. Turing Award recipient is selected by a committee of prominent computer scientists and engineers. The selection process is confidential, and no single person knows the history of all the deliberations over the years.

“ACM has recognized Grace Hopper with the Grace Murray Hopper Award which originated in 1971. It is presented to the outstanding young computer professional of the year. In addition, ACM is a co-sponsor of the Grace Hopper Celebration of Women in Computing which is now an annual event. It is designed to bring the research and career interests of women in computing to the forefront.

“As the demand for talented computing professionals grows, it is increasingly imperative that women and other underrepresented groups be encouraged to pursue this career path. The recognition provided by ACM’s Turing Award this year has already raised awareness of the achievements of women in the field. We hope this news will motivate girls and women to see the growing opportunities for exciting careers, and to get the recognition they have earned as critical contributors to technology and innovation.”

While I’m delighted that the ACM focuses on the issues of women and technology (which it does in a very prominent way), and that Adm. Hopper was given many other honors, it’s a shame that she was not given their highest honor.