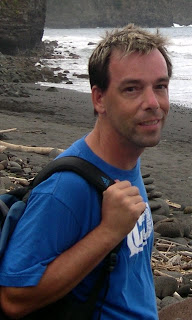 My Hawaii-based colleague Larry O’Brien is a believer in storyboarding.

On his blog, Larry posted a short review of a Visio-based tool called stpBA Storyboarding, “… which every architect and team lead owes themselves to evaluate. I would say it’s revolutionary, but it’s better than that — it simply makes the way you probably already work vastly more efficient.”

Given that Larry (pictured) is already vastly efficient by any standard, that’s a pretty tall claim. Plus, I’m somewhat skeptical because tools like Visio are impediments to my own creativity. That may be a matter of personal style: I’m much more comfortable writing text than drawing with circles and arrows. Which is why, incidentally, I never became a UML fanatic, and why I’m arguably the worst user-interface designer on the planet. I’m just not a visual person. (If you don’t believe me, ask one of BZ Media’s art directors.)