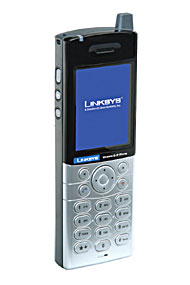 You see, Cisco’s Linksys division already has a line of wireless VoIP telephones called the iPhone, introduced last month. The press has been speculating about how Apple would handle this situation — rumors about Apple’s iPhone have been swirling around for weeks. When Apple made its big announcement yesterday, many of us assumed that Apple and Cisco had worked out the trademark details.

Guess we were wrong. Quoting from Cisco’s news release:

“Cisco entered into negotiations with Apple in good faith after Apple repeatedly asked permission to use Cisco’s iPhone name,” said Mark Chandler, senior vice president and general counsel, Cisco. “There is no doubt that Apple’s new phone is very exciting, but they should not be using our trademark without our permission.

>> Update 1/11: I’ve read speculation that this is all part of a marketing gambit by Apple, and the company intends to relaunch the iPhone as the Apple Phone. It’s not out of the question: the device rumored to be called the iTV was launched as Apple TV. However, this seems extreme for a publicity stunt.