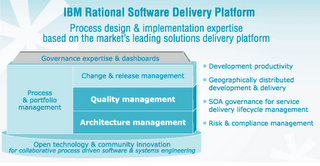 The IBM Rational tools keep going and going… they’ve undergone changes in just about every dimension, over the past five years. They’ve been purchased by IBM. They’ve been rebuilt on Eclipse, instead of the old VisualAge code base. The latest version, called IBM Rational Software Delivery Platform 7.0, debuted yesterday (Dec. 5).

As you’d expect, the big focus of the update (code-named Caspian) is driving SOA-based development. SOA is the acronym-of-choice within the big account that IBM likes to serve with its software tools, its WebSphere app and portal servers, its DB2 database, its Tivoli management suites, and of course, with IBM Global Services.

Beyond the emphasis on SOA, the biggest improvements are in Eclipse support. SDP 7.0 now uses the latest 3.2 version of the Eclipse platform, including the multilanguage IDE. While the focus of the SDP suite is on Java EE-based development on WebSphere, some of the tools (specifically, the testing suites) also work on .NET code as well.

But make no mistake: IBM is continuing to go after big shops that do formal UML-based modeling and who like rigid processes like the Rational Unified Process. The SDP isn’t targeting small or mid-sized development shops using Visual Studio or Borland, or those who like to “roll their own” Eclipse toolchains.

If DoDAF and RUP aren’t in your daily vocabulary, and you have small teams working on agile projects, IBM’s SDP probably isn’t for you. But if you do care about DoDAF and RUP, you have hundreds or thousands of developers on some projects, business processing modeling is at the top of your agenda, and your pockets are deep, then you should call IBM right away to talk about upgrade pricing and migration services.

The ‘oy’ of blogging OSDL in turmoil
Scroll to top