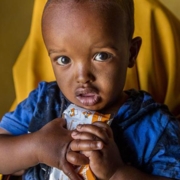 Where will you find CARE? Think of trouble spots around the world where there are humanitarian disasters tied to extreme poverty, conflict, hunger, or a lack of basic healthcare or education. CARE is on the ground in these places, addressing survival needs, running clinics, and helping individuals, families, and communities rebuild their lives.

CARE’s scope is truly global. In 2018, the organization reached 56 million needy people through 965 programs in 95 countries, in places such as Mali, Jordan, Bangladesh, Brazil, the Democratic Republic of the Congo, Yemen, India, the Dominican Republic, and Niger.

CARE didn’t start out as a huge global charity, though. Founded in 1945, CARE provided a way for Americans to send lifesaving food and supplies to survivors of World War II — “CARE packages.” Today, it responds to dozens of disasters each year, reaching nearly 12 million people through its emergency programs. The rest of CARE’s work is through longer-term engagements, such as its work in Bihar State, in northern India.

Bihar, with a population of more than 110 million people, is one of India’s poorest states. Bihar has some of the country’s highest rates of infant and maternal mortality as well as childhood malnutrition. Since 2011, CARE has been working with the Bihar state government and other nongovernmental organizations (NGOs) to address those problems and to increase immunization rates for mothers and children.

The results to date have been significant. In Bihar, the percentage of 1-year-olds with completed immunization schedules increased from 12% to 84% between 2005 and 2018; there were nearly 20,000 fewer newborn deaths in 2016 than in 2011; and the maternal mortality rate fell by nearly half, from 312 to 165 maternal deaths per 100,000 live births between 2005 and 2018. How? Some of CARE’s initiatives involved improving healthcare facilities, mentoring nurses, supporting local social workers and midwives, and tracking the care given to weak and low-weight newborns.

Read more in my story for Forbes, “CARE’s Work In Bihar Shows Progress Is Possible Against The Toughest Problems.”

Linking on-prem data with cloud apps without moving many bytes