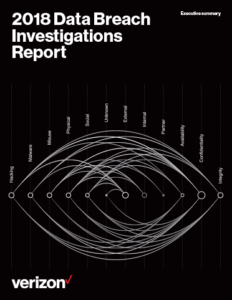 Ransomware was first mentioned in the 2013 DBIR and we referenced that these schemes could “blossom as an effective tool of choice for online criminals”. And blossom they did! Now we have seen this style of malware overtake all others to be the most prevalent variety of malicious code for this year’s dataset. Ransomware is an interesting phenomenon that, when viewed through the mind of an attacker, makes perfect sense.

The DBIR explains that ransomware can be attempted with little risk or cost to the attacker. It can be successful because the attacker doesn’t need to monetize stolen data, only ransom the return of that data; and can be deployed across numerous devices in organizations to inflict more damage, and potentially justify bigger ransoms.

The first way, you never even see the bot. Instead, your users download the bot, it steals their credentials, and then uses them to log in to your systems. This attack primarily targeted banking organizations (91%) though Information (5%) and Professional Services organizations (2%) were victims as well.

The second way organizations are affected involves compromised hosts within your network acting as foot soldiers in a botnet. The data shows that most organizations clear most bots in the first month (give or take a couple of days).

However, the report says, some bots may be missed during the disinfection process. This could result in a re-infection later.

Overall, says Verizon, outsiders perpetrated most breaches, 73%. But don’t get too complacent about employees or contracts: Many involved internal actors, 28%. Yes, that adds to more than 100% because some outside attacks had inside help. Here’s who Verizon says is behind breaches:

Email is still the delivery vector of choice for malware and other attacks. Many of those attacks were financially motivated, says the DBIR. Most worrying, a significant number of breaches took a long time to discover.

Taking Months to Discover the Breach

To that previous point: Attackers can move fast, but defenders can take a while. To use a terrible analogy: If someone breaks into your car and steals your designer sunglasses, the time from their initial penetration (picking the lock or smashing the window) to compromising the asset (grabbing the glasses) might be a minute or less. The time to discovery (when you see the broken window or realize your glasses are gone) could be minutes if you parked at the mall – or days, if the car was left at the airport parking garage. The DBIR makes the same point about enterprise data breaches:

When breaches are successful, the time to compromise continues to be very short. While we cannot determine how much time is spent in intelligence gathering or other adversary preparations, the time from first action in an event chain to initial compromise of an asset is most often measured in seconds or minutes. The discovery time is likelier to be weeks or months. The discovery time is also very dependent on the type of attack, with payment card compromises often discovered based on the fraudulent use of the stolen data (typically weeks or months) as opposed to a stolen laptop which is discovered when the victim realizes they have been burglarized.

Let’s end on a positive note, or a sort of positive note. The 2018 DBIR notes that most people never click phishing emails: “When analyzing results from phishing simulations the data showed that in the normal (median) organization, 78% of people don’t click a single phish all year.”

The less good news: “On average 4% of people in any given phishing campaign will click it.” The DBIR notes that the more phishing emails someone has clicked, the more they are likely to click on phishing emails in the future. The report’s advice: “Part of your overall strategy to combat phishing could be that you can try and find those 4% of people ahead of time and plan for them to click.”

Good luck with that.

Threat report from Oracle, KPMG points to strong trust in the cloud
Scroll to top